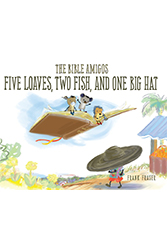 Join the three lovable Bible Amigos, Walla the koala, Donk the donkey, and Edge the hedgehog, as they take off on a giant flying Bible and land in the hearts of young readers. This brand-new book series for kids ages 3-7, is from Frank Fraser, a creative artist who has done work for Disney, PBS Sprout, and Starbucks, among many others. In the series, the three amigos carry God’s love and direction wherever their flying Bible takes them. Featuring plenty of fun, colorful, action-filled pictures, and scripture that comes to life, each Bible Amigos story shares key Bible truths for young readers. In Five Loaves, Two Fish, and One Big Hat, kids will learn they’re never too little to serve God in a big way!