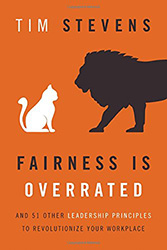 Fairness Is Overrated: And 51 Other Leadership Principles to Revolutionize Your Workplace
by Tim Stevens

Discover the tools of leadership to revolutionize your workplace.

Tim Stevens traveled an alternative road―leaving high school and immediately joining a national non-profit organization. He rose quickly through the ranks of leadership, but nine years later left it all behind to help an upstart church get its footing. During the 20 years Stevens served as Executive Pastor at Granger Community Church near South Bend, Indiana, the ministry grew from a congregation of 300 to more than 5,000; from a staff of five to more than 130; with a preschool, restaurant, three campuses and more than 1,800 new churches planted in southern India.

Leaders learn by leading. Stevens knows that creating a healthy and successful organization requires throwing out the conventional instruction manual and writing one that balances practical lessons, spiritual truths, and twenty-first century realities―exactly what you will find in Fairness Is Overrated.

Stevens, now an executive with the Vanderbloemen Search Group, takes his lifetime of service and dispenses with conventional wisdom. Short, powerful chapters end with actionable discussion questions. Four pillars hold up every successful leader: Be a person of integrity. Identify the right people around you. Build a great culture. Lead through crisis.

This is a manual of doing, not talking. No fluff, no stale inspirational platitudes. It’s time to move past planning and kick-start Monday into action.

After spending 20 years as the Executive Pastor at Granger Community Church, Tim Stevens is now the Vice President of Consulting at Vanderbloemen Search Group.

Tim has been a thought leader in the world of church and ministry for more than a dozen years and blogs at LeadingSmart.com. He has a passion for helping churches connect with people who think church is irrelevant and believes that finding the right staff is the most important and crucial ingredient to the success of any church. Tim is acutely tuned in to pop culture, and has been instrumental in building creative teams, inspiring artists and empowering leaders.

Stevens has co-authored three books in the “Simply Strategic” series, is author of Pop Goes the Church and Vision: Lost and Found. He partnered with The Blythe Daniel Agency to release Fairness is Overrated, published by Thomas Nelson in January 2015. His newest project, Marked By Love, will be released by Barbour Publishing in October 2018.

Tim has taught more than 20,000 church leaders in person at workshops, conferences and seminars since 2002. You can connect with him on Twitter: @timastevens and Facebook: facebook.com/tstevens.

He has published articles in several publications, including Leadership Journal, Rick Warren’s Ministry Toolbox, REV Magazine, Collide Magazine, Outreach Magazine, and Pastors.com. He has been interviewed on pop culture by the Atlanta Journal Constitution and The Wall Street Journal, written leadership articles for FastCompany.com, Entrepreneur.com and Inc.com.

Tim is married to Faith Stevens and their adult children are Heather Snodgrass, Megan Stevens, Hunter Stevens, and Taylor Stevens. 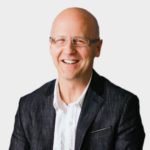 I've been writing books for more than 15 years. When I connected with The Blythe Daniel Agency, it took my writing to a whole new level. Not only did the opportunities increase--but the BDA team helped me to become a more accomplished author.

I've been writing books for more than 15 years. When I connected with The Blythe Daniel Agency, it took my writing to a whole new level. Not only did the opportunities increase--but the BDA team helped me to become a more accomplished author.
https://theblythedanielagency.com/testimonials/tim-stevens/
0
The Blythe Daniel Agency